Posted by Ave Mulhern January 24, 2023
A Few of My Favorite Things… and they are FREE!
You may know that National Fatherhood Initiative® (NFI) is the nation's leading provider of fatherhood research,... END_OF_DOCUMENT_TOKEN_TO_BE_REPLACED
Posted by Christopher A. Brown January 17, 2023
How Father Involvement and Bi-Strategic Parenting Positively Affect Children’s Brain Development
Posted by Erik Vecere January 10, 2023
One-On-One Delivery of NFI Programs – So Simple, So Effective!

Why Parents Shouldn't Be Concerned About Their Children's Texting

My 16-year-old is an outstanding writer. When she asks me to review something she's written, I'm always impressed at the excellence of her spelling, grammar, syntax, and creative word combinations. I rarely have corrections, and when I do they're typically minor. 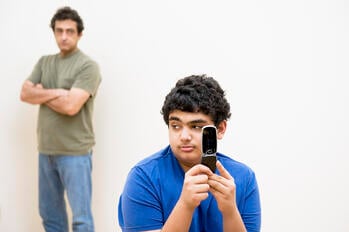 The other day as we discussed an essay she'd written for a college-level communications course she's taking this summer, out of the blue she mentioned that her friends get mad at her for using proper grammar when she texts. She laughed as she shared an example in which a friend had a problem with her using a semicolon in a text. (Say what?) I could tell she actually gets a kick out of her friends' reactions and that those reactions don't bother her in the least.

That conversation reminded me of conversations I've had with my wife and friends about the potentially damaging effects of texting on children's literacy. My assumption had been that when children use incorrectly spelled words, poor grammar, change the way words look in print, and substitute symbols and images (e.g. emoticons) to communicate, it will have a negative effect on their spelling, grammar, and reading and writing skills. Logical, don't you think? But given everything I know about cognitive biases and the importance of using evidence to form opinions (see my recent post as an example), I wondered whether my assumption about the effects of texting might be wrong. After all, I couldn't think of any evidence to back up my assumption.

Sure enough, I was wrong. And oh, how wrong I was. A year-long British study published last month in the British Journal of Developmental Psychology examined, the effects of children's and young adults' grammatical "violations" in texting on spelling, grammar, and orthographic processing (the way words should look in print), the latter having a critical role in reading and writing fluency. The researchers used standardized test of spelling and grammar over the course of one year to measure the effects of texting.

The researchers recruited 243 participants and divided them among three groups: primary school (average age approximately 10), secondary school (average age approximately 13), and young adult (average age approximately 21). They found no negative effect of grammatical violations in texting on children's use of spelling, grammar, or orthographic processing. The only negative effect observed by the researchers was on young adults' use of poor word forms (e.g. "does you" instead of "do you"), but even for this age group, the effects of texting were not a cause for concern. This study adds to the body of evidence that has been building for the past five to seven years that texting does not harm children's literacy. Indeed, the British researchers cite no less than six such studies.

The picture that's emerging is one of texting as:

Now that I'm better informed about texting and its effect on literacy, I better understand why it hasn't had a negative effect on either of my girls' literacy. (My 19-year-old is majoring in journalism and is also an outstanding writer.) I'm even more amazed that my younger daughter insists on using proper spelling and grammar when she texts. I'm also a bit proud because I see that insistence as a form of "sticking it to the man."

At any rate, this evidence doesn't change my opinion that there is a lot not to like about texting. Children, including my own, can spend a ridiculous amount of time texting. They can also text at inappropriate times. I will always get miffed, for example, when my daughters text while we're eating dinner at a restaurant. I'll never understand why the first thing they do after waking up in the morning is, you guessed it, check their texts (and social media). I'm also bothered by the fact that texting leaves a permanent record, so I've often told my girls to be extra careful with the content and meaning of their texts. After all, I tell them, your texts can come back to haunt you. Nevertheless, I now have a better view of texting and stand, to some degree, corrected. Lol.

How often does your child text?