The presence of married fathers in children's lives remains the most vital factor in reducing child poverty. Here's why. 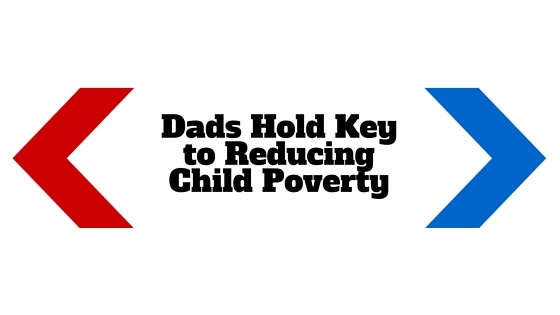 The U.S. Census Bureau just released its report on income and poverty for 2014. The good news or bad news, depending on your perspective, is the overall rate for adults and children living in poverty did not change, from a statistically significant perspective, compared to 2013. In 2014, 13.5 percent of people aged 18 to 64 (26.5 million) were in poverty compared with 10.0 percent of people aged 65 and older (4.6 million) and 21.1 percent of children under age 18 (15.5 million). Children represented 23.3 percent of the total population and 33.3 percent of the people in poverty. It's disturbing that children represent more than a third of the people in poverty, especially because they have no control over their economic situation.

Because this proportion of the population in poverty includes all children regardless of family status, it's necessary to dig deeper into the data to reveal why fathers remain key to reducing child poverty. Fortunately, the Census Bureau digs that deeply. The bureau's analyses of the data reveal that:

These disturbing, depressing numbers show that the mere presence of more married fathers in children's lives will, from a population-based perspective, reduce child poverty.

The only effective, long-term solution to increasing the proportion of children growing up with their married parents is to change cultural norms on the importance of living in a married-parent home for child well-being. The federal government has, with bipartisan support, tried to help by funding healthy marriage and responsible fatherhood programs. But no matter how successful these programs might be or eventually become in helping the children, parents and families they serve, they can't possibly serve enough people to affect the kind of culture change necessary to move the needle. Besides, the level of funding for this effort is minimal as it must compete for dollars with the many other and, frankly, important functions of government, such as funding the social safety net, infrastructure, education and research that are vital to create the vibrant economy in which all families can thrive. As a result, these programs, though important, have only scaled to a level that help some children and families at the highest risk for poverty.

Unfortunately, cultural norms on the importance of children growing up in a married-parent home have been headed in the wrong direction for years. Marriage among the young (age 18 to 32 years) has dropped like a stone during the last four generations, from 65 percent of people in the Silent Generation to 26 percent of Millennials. Moreover, a quarter of all adults age 25 or older have never been married, an all-time high. When they do marry, the average age at first marriage is also at an all-time high of 29.3 for men and 27.0 for women.

As a consequence of these and other trends, a higher proportion of children than ever are born to parents who aren't married. The unfortunate fact is we don't have the cultural will to reverse course. Too many people now see the purpose of marriage as one in which personal fulfillment is paramount and the primary if not sole role of marriage. Marriage has become about "me" and not "we" or "us," as in "family." While it is important that people feel fulfilled in marriage, the problem is far too many of us have separated marriage from its function of providing the ideal environment in which to raise healthy children and, thus, deny its impact on child well-being to the extent that we focus only on personal well-being.

Can we do anything to reverse course? There is a vigorous debate about whether we should give up and say bye-bye to marriage, if not altogether at least to the importance of it as a vital institution. As I've written elsewhere, we can't give up on marriage. We must start by looking at it in a different way -- not as a zero-sum game between whether its role is personal fulfillment or to raise healthy children, but as an institution that can and should fulfill both roles.