Posted by Christopher A. Brown February 9, 2021
What 713 Dads Say About InsideOut Dad® Provides Further Evidence for Its Effectiveness
A study of 713 incarcerated dads by researchers at Utah State University says a lot about the effectiveness of National... END_OF_DOCUMENT_TOKEN_TO_BE_REPLACED
Posted by Ave Mulhern February 2, 2021
Paving the Way for Fathers to Find Their Purpose
Posted by Christopher A. Brown January 26, 2021
Why You Should Use Understanding Dad™ to Improve Coparenting

Involving fathers in child welfare cases is a matter of ethics for child welfare workers, so say researchers who recently completed a study of fathers involved with the child welfare system in the San Francisco Bay area. National Fatherhood Initiative (NFI) can help workers meet this ethical challenge.

The study involved focus groups with 37 fathers that concluded child welfare workers had difficulty connecting with fathers because of the different cultural backgrounds of workers and fathers. The study also concluded that female workers in particular had difficulty relating to fathers because of their different gender and fathers' socioeconomic status (i.e. fathers' disenfranchised status). 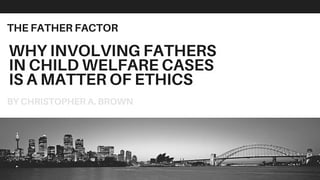 While the conclusions of this study are concerning, they are not surprising. Indeed, the child welfare arm of the federal government (the Children's Bureau within the U.S. Department of Health and Human Services) has long known about the challenges that child welfare workers and agencies have with effectively engaging dads. The bureau released a report nearly a decade ago that found child welfare agencies struggle to identify, locate, and involve dads. My own research in several states with fathers involved in the child welfare system, and the fatherhood practitioners that work with them, found similar issues and others. That research was conducted as part of a comprehensive five-year project funded by the Children's Bureau to help child welfare agencies develop and implement innovative strategies for involving dads. (NFI was part of a three-organization team charged with implementing that project.) The project developed tools now used by state and local child welfare agencies and workers to more effectively identify, locate, and involve dads.

Nevertheless, despite the increased attention on dads in national, state, and local child welfare systems, with 1 in 3 children in the U.S. growing up in father-absent homes the need for child welfare workers to do a better job engaging dads has never been more dire. To help workers and the organizations that employ them meet this ethical challenge, NFI has used its extensive experience in working with child welfare agencies to develop a number of low-cost, easy-to-use resources to help engage dads. We have bundled these resources into our Child Welfare Bundle, and it has been a very popular choice of child welfare agencies across the country to equip their workers in this vital effort. For more information about and to purchase the bundle, click here.

Do you work with dads involved in the child welfare system?

What resources do you use to engage them?