Stunning: The Status of Father Absence Ahead of the Release of 2020 Census Data 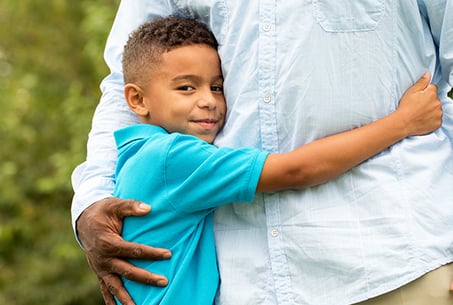 As we eagerly await the release of data from the 2020 Census and what it will tell us about our nation’s progress in addressing father absence, I want to update you on the most recent, encouraging, and stunning data we have on the number and proportion of children growing up in a home without a dad.

National Fatherhood Initiative® (NFI) uses data from the U.S. Census Bureau’s annual Current Population Survey (CPS) to track father absence in the intervening years between the decennial census. The CPS data acts as a more sensitive barometer of father absence. It allows us to see the status of father absence—whether the number and proportion of children in father-absent homes has decreased, increased, or remained the same—from year to year rather than having to wait 10 years to see whether the rate of father absence has changed.

The data in the census and CPS tell us how many children under the age of 18 live in the following types of households:

The data get more granular from there. We use the data to look at father absence by different characteristics of children (e.g. age, gender, and race) and the families in which they live (e.g. family income and whether a parent gets child support).1

Unlike the decennial census that attempts to gather data from all American households, the annual CPS survey gathers data from a sample of households. As a result, the CPS data give us estimates rather than official counts.2 Therefore, the CPS has as a margin of error. The margin of error means that the number and proportion of children in father-absent homes could be higher or lower than the data indicate. It also tells us how confident we can be in the CPS data. The lower the margin of error, the more confident we can be in the accuracy of the data.

To calculate the number and proportion, or rate, of children in father-absent homes3 in the census and CPS data, we:

With the release of the 2020 CPS data this month, we estimate that:

What does that tell us about the most recent trend in father absence?

Fewer children live in father-absent homes at any time since 1993!

A lower proportion of children are in father-absent homes at any time since 1990!

Before we get too excited about this encouraging trend, however, it’s vital to realize that the number and proportion of children in father-absent homes is still unacceptably high. We still have a lot of work ahead to see this downward trend continue.

A Moment to Celebrate

Nevertheless, we should take a moment to step back, exhale, and celebrate the collective work of the many organizations and individuals at the national, state, and local levels that have moved the needle downward since the rate of father absence started to level off in 1995.4 Moreover, we should celebrate the fact that:

Where We Go from Here

We must continue to put our nose to the grindstone.

Our nation’s children depend on us to give them the best environment in which to grow into healthy adults.

Are you aware of the great news in reducing father absence?

Are you as excited as we are to see what the 2020 Census tells us about father absence?

Looking for the most comprehensive source of data on father absence at the national and state levels, and on the consequences of father absence and benefits of father involvement for children? Click here to learn more about Father Facts and how to acquire it.

1 Click here to download historical CPS data tables that NFI uses to calculate the overall trend in father absence over time and the trends in father absence in different types of families (e.g. White, Black, and Hispanic).

2 Because the decennial census provides official counts, we place an even greater emphasis on what it tells us about the long-term trend in overall father absence and trends within specific populations. For a more detailed discussion about the importance of the 2020 Census for our collective work to reduce father absence, read this previous blog post.

3 These are homes in which there is not a biological, step, or adoptive father.

4 We must also recognize that there are other factors at play in reducing the number of children in father-absent homes, such as the decades-long lowering of the fertility rate. The fertility rate reached a record low in 2019 at 58.2 births per 1,000 women. The amazing decline in the teen birth rate of 73 percent since 1991 has played a large role. This and other factors that affect the number of children in father-absent homes is why NFI also places an emphasis on lowering the proportion of children in these homes.