Posted by Christopher A. Brown January 31, 2023
The Value in Customizing a Fatherhood Program
There’s a lot of emphasis these days on implementing fatherhood programs with fidelity. Indeed, many funders of... END_OF_DOCUMENT_TOKEN_TO_BE_REPLACED
Posted by Ave Mulhern January 24, 2023
A Few of My Favorite Things… and they are FREE!
Posted by Christopher A. Brown January 17, 2023
How Father Involvement and Bi-Strategic Parenting Positively Affect Children’s Brain Development

6 Steps to Solving Most Any Problem

When mom and dad have different ideas on what to do when it comes to the kids, from what their child should wear, to when their child should come home, and so on, communication usually stalls. This is a nice way of saying, you aren't talking to each other! When this happens, both parents can feel frustrated and often argue. Fussing and fighting isn't the way to live—for you or for your kids. Let's have a new goal—to reach a place where both people have power and are listened too. Sound crazy? We think not... 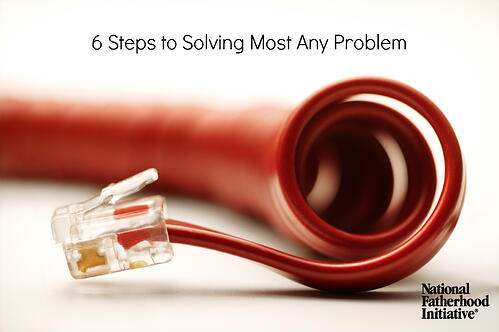 Whether it's communicating with your spouse, former spouse, son or daughter, problem solving like the list that follows will leave both parties feeling satisfied. Use these steps to help solve problems between you, your wife, your ex-wife, or heck, try this with your kids too!

Write it down. Seriously, have you ever been arguing for a extended period of time, and there doesn't seem to be an end to the bickering? It's probably because one or both of you lost sight of the real problem. Work on only one problem at a time. You can't fix everything overnight. Agree at the start on one problem to try and solve, then attack that one problem, not EVERY problem!

2) Decide who owns the problem

Is someone doing something you or someone else doesn’t approve of, but does not see it as a problem? Is the problem yours or someone else’s? More than one person can own a problem. It's important to discern and accept responsibilities for said problem before moving to the next step.

3) Discuss why the problem needs to be solved

4) List what's been done to try and solve the problem

Write them down if the person has tried a lot of things. This process can go a long way in showing how much both parties care about fixing the problem. This also provides a great road map to what hasn't or doesn't work such that you can try something new to solve the problem. Which leads us to this...

They must be realistic ideas. Write them down if there are a lot of them and use the ideas during the next step. Discuss pros and cons for each idea.

If you brainstorm ideas and one or more of them don’t offer a clear way to solve the problem, go through the first three steps again to figure out the problem, see who owns it, and why it needs to be solved.

You could get stuck on Step 6 if you and the person involved doesn't have your ideas about the right way to solve the problem.