Posted by Christopher A. Brown January 31, 2023
The Value in Customizing a Fatherhood Program
There’s a lot of emphasis these days on implementing fatherhood programs with fidelity. Indeed, many funders of... END_OF_DOCUMENT_TOKEN_TO_BE_REPLACED
Posted by Ave Mulhern January 24, 2023
A Few of My Favorite Things… and they are FREE!
Posted by Christopher A. Brown January 17, 2023
How Father Involvement and Bi-Strategic Parenting Positively Affect Children’s Brain Development

A Simple, Potent Combo for Providing Feedback to Dads 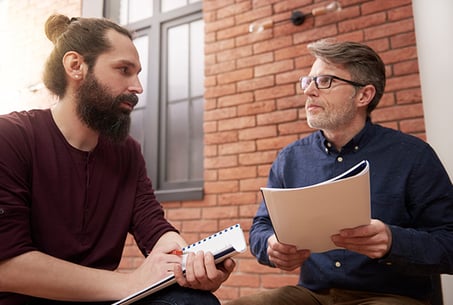 When was the last time someone gave you feedback, on anything?

How did you react? Were you open to it? Did you react positively or negatively to it?

Chances are that how you reacted depended on the type of feedback they used, the manner in which they delivered it, and the quality of your relationship with them.

It’s Better to Give Than to Receive

On the flip side of receiving feedback is providing it. The ability to provide quality feedback is an essential communication skill to develop if we want to help others improve. The problem is most of us are either unwilling to provide feedback because we’re afraid how others will react to it or simply don’t know what quality feedback looks like and how to provide it.

That’s why I was so pleased to learn about two types of feedback and the most appropriate use for each one. Use them to provide quality feedback to the dads you serve.

Appreciation is a tool of emotion. Advice is a tool of logic. When you use both tools, you appeal to the emotional and rational sides of the brain. While you might need to use only one type of feedback depending on the situation, when you use them together, they’re a potent combination.

Here’s an example of how you might use them.

You have just started to work one-on-one with Nate, a noncustodial dad of 5-year-old Jason. During your first meeting, Nate shares that his strongest wish is to increase the time he spends with Jason.

You quickly surmise that Nate’s challenge is that he must approach Karen in a way such that she doesn’t build a wall. Nate’s problem is that he continues to ask to spend time with Jason without tackling the problem that causes Karen to build a wall. That’s what he doesn’t get.

Now that Nate is sufficiently motivated—and hopeful now that he has you on his side—you use an awareness-raising tool called analogical thinking as a transition to giving him advice on the need to change course. You also sprinkle in the 5 Whys technique.*

Now that Nate gets it, you start to explore why Karen sees him as an invader and wants to protect herself and Jason. You give Nate advice to change course. He must approach Karen to work on their relationship. You tell him not to address time spent with Jason until his relationship with Karen improves. You tell him to focus on and be open to Karen’s input on why she thinks she must protect herself and Jason. You tell him that he must be open to changing his behavior towards her. You teach Nate communication skills to use during his talks with Karen.

I hope you will use appreciation and advice with the dads you serve. A bonus is that as you become skilled at using them, you can teach them to dads so that they can provide quality feedback in their personal and professional lives.

Do you use appreciation or advice appropriately with the dads you serve?

If you use appreciation and advice, have you taught dads how to use them?

*Analogical thinking helps people solve challenging problems. It involves searching for and identifying similar situations or scenarios in different domains that might seem at first to have little in common with the problem at hand. It’s effective because it forces people to think outside of their normal inclination to look for similar situations in the same domain. It opens their minds to possibilities they wouldn’t have considered otherwise. It helps people see what they won’t otherwise.