Posted by National Fatherhood Initiative May 24, 2022
The State of Moms and Dads in America (2022)
This article is written by Mike P. Taylor and was originally published at the Dad Well Done. It is republished here... END_OF_DOCUMENT_TOKEN_TO_BE_REPLACED
Posted by Christopher A. Brown May 17, 2022
Here’s What We Know About the Work of Federal Fatherhood Grantees
Posted by Ave Mulhern May 10, 2022
3 Ways to Keep Fatherhood Program Group Sessions Focused and on Track

Are Solo and Absent Dads More Alike or Different? 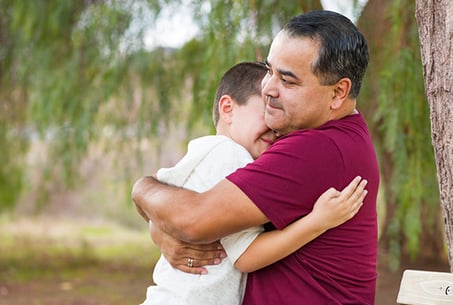 If I were to ask you whether dads who raise their children without a spouse or partner are more alike or different from dads who live apart from any of their children, what would you say?

According to a U.S. Census Bureau survey conducted in 2014, they’re more alike.

Before we get to the details of their similarities, let me clarify some terms.

A “solo dad” is not synonymous with a “single dad.” A solo dad is a type of single dad who raises a minor child alone.  An “absent dad” is one who doesn’t live with any of his minor children.

The ways in which solo and absent dads are more alike than different rests on data from an analysis of the Survey of Income and Program Participation that compared them to the entire population of all dads with minor children. (There are 121 million men in the U.S. who are dads.) Here’s how they’re more alike.

Why does it matter that these types of dads are more alike than different?

If you serve solo and absent dads, you might assume that they’re more different than alike. As a result, you might overlook their similarities and miss opportunities to provide these dads with the help they need, such as how to navigate relationships with more than one mother of their children and how these two types of dads could help and support one another.

Before reading this post, had you heard the term “solo dad?” If so, did you think it synonymous with “single dad?”

Do you serve solo and absent dads? If so, do you have anything in place that encourages them to help and support one another based on their similarities?