Posted by Christopher A. Brown January 31, 2023
The Value in Customizing a Fatherhood Program
There’s a lot of emphasis these days on implementing fatherhood programs with fidelity. Indeed, many funders of... END_OF_DOCUMENT_TOKEN_TO_BE_REPLACED
Posted by Ave Mulhern January 24, 2023
A Few of My Favorite Things… and they are FREE!
Posted by Christopher A. Brown January 17, 2023
How Father Involvement and Bi-Strategic Parenting Positively Affect Children’s Brain Development

Carol Dweck, Ph.D., is a leading psychologist who has conducted extensive research into people's mindsets when it comes to their views on the static versus pliable nature of intelligence and other human abilities. In her book Mindset: The New Psychology of Success

, Dweck describes two mindsets. The fixed mindset is characterized by a belief that a person's intelligence, attitudes, beliefs, and abilities (e.g. parenting, cooking, writing, etc.) are set in stone and can't be developed or grown. The growth mindset is characterized by a belief that those same aspects of a person can, in fact, be developed and grown. A person can have a fixed or growth mindset they apply across the board or a kind of mixed mindset in which they believe some things are fixed while others can be grown. The graphic below provides an excellent summary of the differences between the two mindsets. 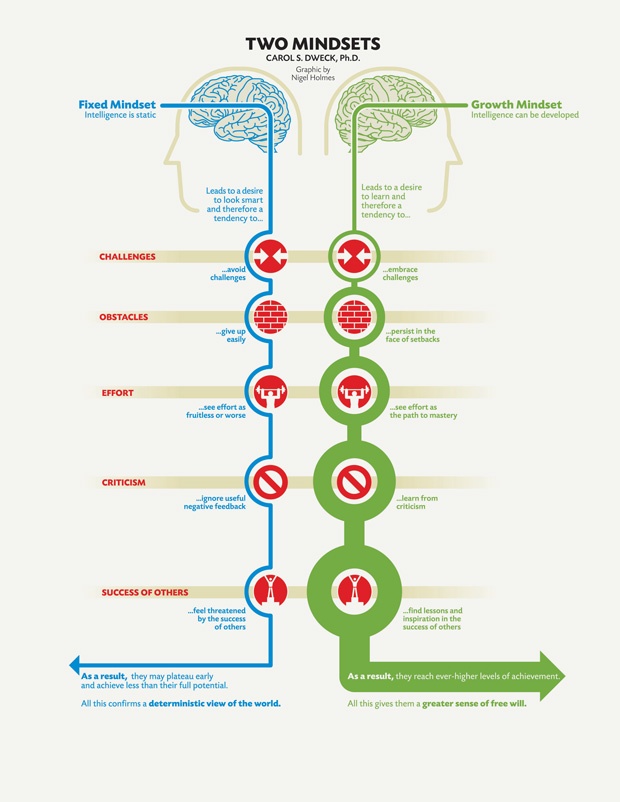 Whether a person generally has one mindset or the other explains a lot of the differences in how people behave and approach certain situations. When it comes to personal improvement, for example, a person with a fixed mindset tends to be super sensitive and dismissive when someone suggests areas of improvement. A person with a growth mindset, in contrast, tends to be open and accepting of such a suggestion. The same is true of parenting. Have you ever suggested to one friend that he could improve his parenting by doing something new or different and another that she could do the same and gotten totally different reactions--one open and accepting and the other closed and dismissive? Have you ever suggested to your spouse or significant other a way to improve his or her parenting? What reaction did you get? Has someone ever suggested to you that you could improve your parenting? How did you react?

Regardless of your experience in suggesting that others in your personal life can improve their parenting--or in receiving suggestions--the work you do with dads is affected by the mindsets they have about improving as a man, father, and husband/partner. One dad might have a fixed or growth mindset that he brings to every aspect of his life, while another dad might have a mixed mindset that makes him resistant to change in certain areas (e.g. his view of the mother's ability to be more accommodating in granting him access to his child) but open to change in others (e.g. his ability to learn more effective tactics to discipline his child). What might look like a schizophrenic reaction is simply a different mindset applied to a different situation.

Here are some of the primary areas affected by dads' mindsets to reflect on as you work with individual dads and groups of dads:

Knowing the mindsets of the dads you work with and to which aspects of their lives they apply them will make you a more effective agent of change.

To help you develop and grow fathers, all of us at NFI bring the same growth mindset to an organization's ability to become a father-friendly organization and to improve its fatherhood program(s). That mindset is why we provide a ton of free capacity-building resources that focus on the entire organization, such as the Father Friendly Check-Up™, and implementation of fatherhood programs, such as the Research to Application series. There's no reason your organization or program can't develop and grow! Check out our new Free Resources section that just keeps growing and growing!

What mindset do you bring in working with dads?

What mindsets do the dads you work with have in general and about specific areas of their lives?

What mindset does your organization have in helping dads to be the best dads they can be?