Posted by National Fatherhood Initiative August 2, 2022
Parenting Styles – Which One is Best?
We came across this article on parenting styles that is valuable for anyone working with fathers and families. The... END_OF_DOCUMENT_TOKEN_TO_BE_REPLACED
Posted by Melissa Byers July 26, 2022
New Data Finds the “Success Sequence” Effective Across Every Demographic
Posted by Erik Vecere July 19, 2022
How to Use A Logic Model to Supercharge Your Fatherhood Outcomes

I often feel inadequate at managing work and family. Sure, I get home at a decent hour each day. But, I have to start early to accomplish this. By evening, I'm tired or still have my mind on work. Then I read a story like this one. This guy sounds like he has managing work and family figured out. Forbes named him, "America’s Most Promising CEO Under 35." He started a company in his mid-20’s that raised $70 million in 2012. By 2014, he was known as "The Guy Who Turned Down $500 Million For His Startup." Now, with a $1 Billion valuation, Ryan Smith, CEO of Qualtrics, can teach us the one thing he does to be successful with work and family.

After about a decade of bootstrapping, Qualtrics made its way into a profitable company generating $50 million in revenue. In 2012, they had 200 employees and 3,800 customers. Qualtrics helps companies perform employee and customer surveys in the cloud. It was created by Ryan Smith's dad, Scott Smith, a professor of marketing at BYU's school of business. My guess is that Qualtrics is a company that resembles the brands you'll find on our social good page—a brand who cares about fathers and families.

At 33 years old, a company offered to buy Ryan Smith's startup Qualtrics for more than $500 million, he asked his wife to take a drive. Smith ended up turning down the $500 million offer to sell his company. In 2014, Smith had 6,000 customers and 550 employees, and the company is expanding nationally and internationally opening an office in Dublin, Sydney, Seattle, and Washington, D.C..

After he and his wife talked, they felt strongly that earning so much money at once could "negatively impact the way they were raising their children." Smith and his wife had learned to manage work and family life.

"As a founder, you're either the type that gets invigorated with every milestone, or you get less interested. For me the bigger we get, the more scrappier we get, the hungrier I get," Smith told Business Insider in 2014. "I have to keep telling myself to look around and enjoy this," he said. "We sat in a basement and bootstrapped for 10 years so we can do this, be here. Now we have bunch of money, a ton of customers, and we're dominating our market." Together, the Smiths decided to keep their 800-person company private. Qualtrics is currently worth over $1 billion.

With the help of a CEO coach, Smith relates work-life balance to a plane that can "go lopsided and constantly needs to be stabilized." On one wing is his family, on the other is his work. When he's traveling for business, the work side of the plane tilts. Then, when he gets back home to his family, he knows to keep his schedule open for home and family life, in order to tilt the wings of his plane back up.

Smith's CEO coach taught him a strategy for success to be done every week. Smith's coach asked him what jobs he was responsible for in life. Smith replied the following:

I'm guessing your list looks like Ryan's. His coach then asked what he could do for each job that week to make him feel successful. For instance, if Ryan dated his wife and bought flowers, that could make him feel like a decent husband. Teach his daughter to ride a bike? Boom, instant better dad for the week.

Ryan found he could combine tasks on his list to achieve everything more efficiently. He learned quickly, if he was really productive, every task on the list starting Sunday could be done by Tuesday. If he took his daughter to his parent's house and taught her to ride a bike, he could be both a good father and son. Bam.

Through all of this, Smith has learned people usually plan for one part of life ("I'm going to sell my company by the time I turn 30.") Most times, people "either don't know which steps to take to achieve that goal, or they don't plan what to do after the goal has been achieved."

While we know it takes quantity to ultimately get quality time, I think Ryan's plan of breaking done work and family life goals into weekly tasks is brilliant. We need to work against waking up one day and realizing our dreams and/or priorities have slipped from our radar. This takes a strategic plan. The truth is, what doesn't get scheduled, doesn't get done. This is true in work and with family.

Business Insider points out that after Smith explained this success tactic in an interview with them on Friday evening, he left the conference. While others stayed out late at a local pub, Smith drove three hours to Dublin and booked an early flight home to Utah. When his children woke up on Sunday morning, they spent all day with their father. This story illustrates in real life exactly the type of intention and focus we should have as husbands, fathers, sons, and leaders. It's the kind of focus I want to live out. Thank you, Ryan Smith, not only for having a great first name, but sharing a great strategy for us to follow. 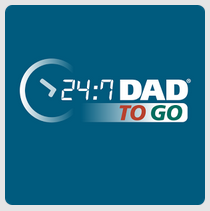 24/7 Dad To Go App allows dads to customize time-sensitive checklists. These checklists can include items related to involved, responsible, and committed fatherhood. You can be an intentional dad too.

> Find the app and start being a better dad here.