Posted by Christopher A. Brown August 9, 2022
Have Americans’ Attitudes About Stay-at-Home Dads Truly Changed?
What’s your attitude toward stay-at-home dads? Do you view them positively or negatively? No matter your attitude,... END_OF_DOCUMENT_TOKEN_TO_BE_REPLACED
Posted by National Fatherhood Initiative August 2, 2022
Parenting Styles – Which One is Best?
Posted by Melissa Byers July 26, 2022
New Data Finds the “Success Sequence” Effective Across Every Demographic

It's that time of year, the time for graduation speeches and shaking hands for a job well done. As students across the nation are receiving certificates for their accomplishments, here are gentlemen getting a different certificate for walking the line. Reporting from Selmer, Tennessee, ABC WBBJ Eye Witness News 7 Journalist Katie Shambo shows a graduate program of a different kind—but filled with even more sense of accomplishment and purpose. 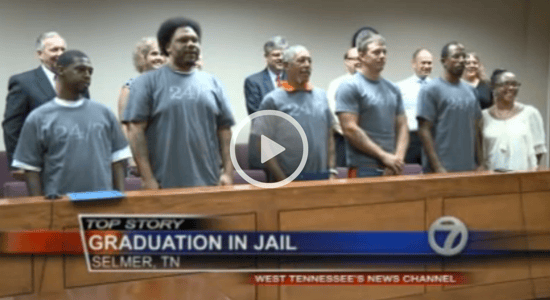 You can read the original post Dads Graduate from Pilot Program in McNairy Co Jail. Coverage and excerpts from the original story follows in this post.

It's Wednesday morning, and the McNairy County Jail is holding its first graduation for its fatherhood pilot program. "The sheriff said that I don't have to come back and that really stuck with me," inmate and InsideOut Dad® graduate Joseph Lands, says. Shambo reports, Lands has been working toward this day since September.

"The sheriff said that I don't have
to come back and that really stuck with me."
—Joseph Lands (InsideOut Dad® graduate)

"It means the world. I mean without a second chance we'd be dead in the water we wouldn't have a leg to stand on and this gives us an opportunity to be a better person to be a productive member of society," says Land.

Shambo says Lands is one of five inmates who make up the McNairy County Jail's first graduating class of the Inside Out Dad® program. As NFI readers know, the program was established to help incarcerated fathers with fatherhood and parenting skills along with other resources and opportunities that will help them when they're released.

For some, jail is a time to rethink, refocus and make the necessary steps not to re-offend and that's what the Inside Out Dad® program is designed to do. "Knowing that people care it helps out a lot. I mean it makes you want to strive to be a better person it's a good thing," Lands said.

Shambo points out that Lands has a 10-year-old daughter. Lands has been in and out of jail six times, but with his new skills and resources, "this will be my last," he says.

Director Jimmy Bell says that "in addition to helping the men be better dads they are now prepared to support their families." "They all have a resume now," says Bell, "They also now have a desire to leave a life of crime behind."

"They all have a resume now...
they also now have a desire
to leave a life of crime behind."
—Jimmy Bell, Director

Shambo reports The Southwest Human Resource Agency plans to implement the program in seven more West Tennessee County jails by July 1. In McNairy County, they will also begin a similar program for women in July.

Watch the video that follows about the first fatherhood program in McNairy County, Selmer, Tennessee. Learn about how these men are set to walk a different path—a path leading back to their families. Make no mistake about it, there may not be institutional columns or caps and gowns in this video, but among the prison bars and orange jail suits, these men are no longer called by their inmate number. They are called by their new names...24/7 Dads.


Can't view the video? Watch the full video and interview about the Inside Out Dad® Program in this Tennessee Pilot Program here.

Visit us for more information on the Inside Out Dad® Program or register for our upcoming webinar training for InsideOut Dad® happening June 25th. Get the official 24/7 Dad® t-shirt for you or the group you lead here.