Posted by Christopher A. Brown January 31, 2023
The Value in Customizing a Fatherhood Program
There’s a lot of emphasis these days on implementing fatherhood programs with fidelity. Indeed, many funders of... END_OF_DOCUMENT_TOKEN_TO_BE_REPLACED
Posted by Ave Mulhern January 24, 2023
A Few of My Favorite Things… and they are FREE!
Posted by Christopher A. Brown January 17, 2023
How Father Involvement and Bi-Strategic Parenting Positively Affect Children’s Brain Development

The Dismal Place of the U.S. on Father Absence

How much do you know about the global epidemic of father absence? Do you know it's global? Do you think it's a problem exclusive to the U.S., developed countries, or Western cultures? If you're not sure how to answer these questions, you're not alone. 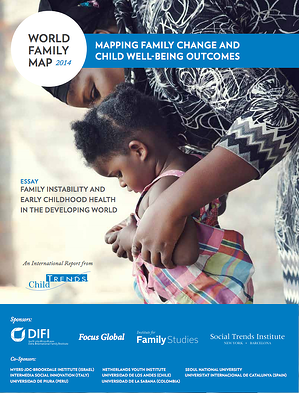 It's easy for us at National Fatherhood Initiative to be myopic at times when it comes to addressing the crisis of father absence. It's easy for us to lose sight of this global epidemic because we're focused on addressing it in the U.S. But the fact is our resources are used all over the world. Throughout our 20-year history, we've had people and organizations from across the globe who were considering or already had started a fatherhood initiative or program contact us via phone and e-mail and pick our brains. A few people have even traveled thousand of miles to visit us in person. Others have simply purchased our resources and programs for immediate use. Why? Because they recognized the epidemic of father absence at their own doorsteps and, like us, decided to do something about it.

Understanding our nation's place in addressing this global epidemic is vital because it raises the awareness of anyone interested in this issue about how bad our plight really is. That's why I'm so grateful to Child Trends for its development of The World Family Map, a report that monitors global changes in the areas of family structure, family socioeconomics, family processes, and family culture, focusing on 16 specific indicators selected by an expert group because of their known relationships to child outcomes in the research literature. Each annual report of the project provides the latest data on these indicators. Child Trends released the first edition of the map in 2013 and just released the 2nd edition this month. Most important to those of us in the U.S. is that it provides a snapshot of where our country stands on a range of child well-being issues compared to the rest of the world.

This edition of The World Family Map gathered data on the 16 indicators from 49 countries grouped into 8 regions: Asia, the Middle East, sub-Saharan Africa, Oceania (Australia and New Zealand), North America (Canada, Mexico, and the U.S.), Central and South America, Western Europe, and Eastern Europe. There are several of the 16 indicators that are most relevant to father absence that include the proportion of children (under the age of 18) growing up with a single parent and the proportion of children born outside marriage, the key driver of father absence in the U.S.

The important data related to father absence are:

Because the report doesn't say anything specifically about the place of the U.S. on indicators related to father absence, I did some quick calculations. The data are not encouraging.

There are cultural factors related to high rates of father absence an nonmarital childbearing. One of those factors is the cultural norms reflected in the attitudes people have about single parenthood and whether children need both a mother and father to thrive. (For a complete treatment of attitudes about fathers and fathering among fathers and mothers in the U.S., download our free reports Pop's Culture: A National Survey of Dads' Attitudes onFathering and Mama Says: A National Survey of Mothers' Attitudes on Fathering.) On those measures, the data are also not encouraging or surprising.

The first characteristic of the 24/7 Dad is self-awareness. We should keep this critical characteristic in mind as we understand the dismal place of our country in ensuring that children grow up with an involved, responsible, committed father. An awareness of these data gives me even more reason to see our country turn the corner on this issue.

What impact has this post had on your view of father absence generally and in the U.S.?