Posted by Christopher A. Brown January 25, 2022
How to Help Dads to Help Their Kids Avoid ACEs
Have you heard the term “adverse childhood experience?” An adverse childhood experience (ACE) is an experience in... END_OF_DOCUMENT_TOKEN_TO_BE_REPLACED
Posted by Melissa Steward January 19, 2022
Give this One Thing to New Dads to Bring Them in Right from the Start
Posted by National Fatherhood Initiative January 11, 2022
How Effective Are Programs Supporting Unmarried, Nonresidential Fathers?

381 Dads & Counting: Kentucky Dept of Corrections is Changing Fathers from the Inside-Out

There are over 2.3 million men and women in prison today. Ninety-five percent of these individuals will eventually be released from prison. How we prepare these moms and dads while behind bars and upon release matters.

Sadly, two out of three offenders will re-offend once released. There is an intergenerational cycle of incarceration: a study of 109 juvenile offenders indicated that family structure significantly predicts delinquency.* Said in a less-academic way: when dad's in prison, his child is more likely to go to prison. A generation of children is growing up without involved dads. We must train fathers how to dads while in prison.

A generation of children is growing up without
involved dads. We must train fathers
how to be dads while in prison.

How can this problem be solved? Are we comfortable letting offenders rot in jail? Or will we rehabilitate these persons from the inside-out?

The Kentucky Department of Corrections is getting it. Eighty-nine percent of Kentucky's inmate population is male—and many are fathers—fathers returning to their families and communities. Kentucky is all too familiar with the issues from releasing fathers who have not been prepared "on the inside" to be involved, responsible fathers.

89% of Kentucky's inmate population is
male—and many are fathers—fathers returning
to their families and communities. 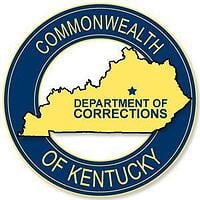 The Kentucky Department of Corrections (DOC) mission is to:

Protect the citizens of the Commonwealth and to provide a safe, secure, and humane environment for staff and offenders in carrying out the mandates of the legislative and judicial processes; and to provide opportunities for offenders to acquire skills that facilitate non-criminal behavior.

The Challenge
Until finding NFI's programs, Kentucky didn't have a program in place to serve dads. Eighty-nine percent of Kentucky’s inmate population is male and many are fathers, some even grandfathers.

In many cases, dads in prison get a visit from their child, however it's not all roses. Their child is confused and upset that dad is in prison, and there aren't clear answers for the child about why dad isn't in their lives. These children have to draw their own conclusions.

Then one day, dad is released. Dad's coming home! Hopefully, he's coming home to the family he once left. This dad will be faced with marriage, family and parenting decisions. What dad learned or didn't learn from prison about connecting with his wife and kids will be tested within minutes.

This challenge moved the Kentucky DOC to train and connect these dads to their families before release. The state was required to use an evidence-based program, and wanted to implement a program to reach dads both while in prison and once they left.

The Solution
In their research for a suitable fatherhood training, Kentucky found NFI's InsideOut Dad® program, the only evidence-based program developed specifically for incarcerated fathers. InsideOut Dad® has been implemented with fidelity, and provides a cognitive behavioral therapeutic approach, along with a focus on the inmate and the child.

Research shows that fathers who are connected to their children and family prior to release are more likely to successfully integrate back into the community and less likely to return to prison. This fit the bill for Kentucky, and they now run InsideOut Dad® in their 10 all-male facilities.

Research shows that fathers who are connected
to their children and family prior to release
are more likely to successfully integrate back into the community
and less likely to return to prison.

NFI also worked with Kentucky to create a re-entry program to help dads continue building their fathering skills once released. Kentucky's DOC works with community-based organizations, via the state’s Probation and Parole Division, to deliver NFI’s 24/7 Dad® program to fathers in transitional facilities and other community-based organizations in the re-entry field. 24/7 Dad® addresses fathering from a holistic perspective and continues to build on pro-fathering behaviors.

Speaking with a representative of the Kentucky DOC, she pointed out that by using InsideOut Dad® and 24/7 Dad® programs, the state was addressing the top four needs of fathers:

Since the state started tracking the use of the program in 2012, 381 dads have graduated from program.

The best news? The state has seen a clear shift in the inmate population from an egocentric attitude, to a focus on their families and children, even from inside prison. In addition to the fathers benefiting from the program, the DOC is meeting their statute requirement by offering both the program inside prison and 24/7 Dad® outside prison while inmates make their transition.

The state has seen a shift in the inmates
from an egocentric attitude, to a focus on
their families and children, even from inside prison.

For more information on the products and services the Kentucky DOC is using along with the organizations they are partnering with, view the full case study and visit our Corrections Programs page for more program successes.

How is your state helping incarcerated fathers connect with their families from the inside-out?