Posted by Erik Vecere September 21, 2021
A New Sure-Fire Tool that Leads to Better Father Engagement
If you want a sure-fire way to create low and no-cost strategies to increase father involvement in your organization’s... END_OF_DOCUMENT_TOKEN_TO_BE_REPLACED
Posted by Melissa Steward September 14, 2021
[Free Webinar] Men’s Health and Fatherhood: What Do Dads Need to Know?
Posted by Christopher A. Brown September 7, 2021
More Research Shows Dads Stepping Up During the Pandemic 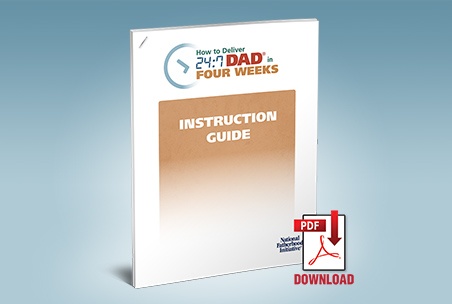 One of the biggest challenges organizations have in serving dads is getting them to commit to attend a fatherhood program that can take several months to complete. That’s true of any fatherhood program, including the evidence-based 24/7 Dad® program of National Fatherhood Initiative® (NFI).

The standard timeframe for delivering the 24-hour 24/7 Dad®program is over three months, one two-hour session per week for 12 weeks. To reduce the three-month time commitment, some organizations use alternative timeframes to deliver it. These timeframes include delivering two sessions per week for six weeks and delivering half the sessions on a weekend followed by the remaining half on another weekend.

The test went extremely well—so well, in fact, that we decided to create “How to Deliver 24/7 Dad® in Four Weeks,” a free downloadable guide that shows you how to deliver the program in four, two-hour sessions and still use the program’s evaluation tool! It lays out which portions of the program to include in each session so that you can still evaluate it with the 24/7 Dad® Fathering Survey.

I wish you the best as you determine the best timeframe to use with your dads!

What timeframe do you use to deliver your fatherhood program?

If you have problems recruiting and retaining dads, which of the timeframes included in this guide would make the most sense for your setting?