Posted by National Fatherhood Initiative February 16, 2021
After jail: DeAndre McCall's fatherhood awakening
This article is written by Brian McMillian and originally appeared at the Palm Coast Observer. The article is... END_OF_DOCUMENT_TOKEN_TO_BE_REPLACED
Posted by Christopher A. Brown February 9, 2021
What 713 Dads Say About InsideOut Dad® Provides Further Evidence for Its Effectiveness
Posted by Ave Mulhern February 2, 2021
Paving the Way for Fathers to Find Their Purpose

When country singer Rodney Atkins’ catchy single “Watching You” climbed the Billboard charts to #1 in 2007, I remember thinking, now there’s a corny little song with a powerful message.

Atkins claims to have written the song for his own young son, who was then starting to imitate his every move.

In the first stanza, the young boy unexpectedly uses a four-letter word while riding in the car with his dad. In the final stanza, he falls to his knees at bedtime in spontaneous prayer. In the lyrics, the singer questions where the boy learned these behaviors. The child’s response is “I’ve been watching you, Dad. Ain’t that cool?” 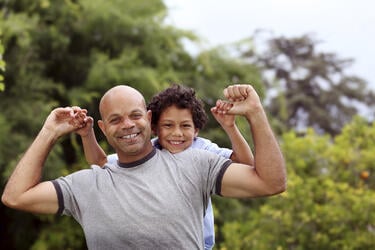 Children are master imitators. As early as three months of age, you smile, and they smile. They are hard-wired to imitate the behavior of those who care for them.

As they get older, they are able to imitate much more than just a smile. They can, and will, imitate anything they perceive as valuable and are especially prone to imitate behaviors modeled by the ones they love.

Unfortunately, children don’t discriminate very well between what they should imitate and what they shouldn’t. As in Atkins’ song, they’re just as likely to imitate the bad behaviors as they are the good. And they see everything!

Little eyes are always watching and always planning on how they will imitate what they see. It’s very cute, but sometimes creepy when they precisely mimic a behavior that you didn’t even know they saw. A swear word that sounds as if it came directly out of your own mouth is the classic example.

Children have another modeling ability that’s very important to understand. They can witness a meaningful behavior and retain its importance for years without modeling it, waiting for the perfect occasion when it is relevant.

A preschool child may not be capable of immediately imitating their dad who offers help to a neighbor in need, who loves and pampers their mother, who smokes, or who drives aggressively. This does not mean that when the time and opportunity are right, the child won’t be influenced by what they observed from a loved one.

The desire to imitate those we love and admire runs deep and lasts a lifetime. I have two adult daughters, 28 and 30 years of age. As they navigate adulthood, I am often surprised to see them imitate the things they witnessed when they were children, but only when, as adults, they get to do for themselves.

Their imitation is undeniable, from the way they choose restaurants, to the way they talk about their bosses. Ironically, these are not things we have ever discussed, or things that were directly taught.

The old adage used by some parents, “do as I say, not as I do,” is a useless and hollow phrase. Children aren’t as good at following directions as they are replicating behaviors they perceive to be valuable and relevant.

Because they love and admire you, they find what you do valuable, and eventually it will be relevant. So, dads, remember that little eyes are always watching, ready to imitate the behaviors they see.

The fact that they don’t demonstrate the behavior immediately, or in your presence, does not necessarily mean that it wasn’t seen and logged into memory for future use.

Fathers’ impact on their children is through the moment-to-moment experiences and the modeling opportunities they provide. It’s the common little things that can happen at any time that eventually get translated into behaviors of value.

Dads, be mindful of your acts. You never know when that four-letter word will slip from your child’s mouth, or when you might pass by their bedroom and see them down on their knees in prayer.

This is a post from David Andrews. David is the Dean of the School of Education at Johns Hopkins University, Professor of Education and Public Health, and is author of "My Father’s Day Gift," a powerful story about the influence of fathers and male role models.