Posted by Christopher A. Brown January 25, 2022
How to Help Dads to Help Their Kids Avoid ACEs
Have you heard the term “adverse childhood experience?” An adverse childhood experience (ACE) is an experience in... END_OF_DOCUMENT_TOKEN_TO_BE_REPLACED
Posted by Melissa Steward January 19, 2022
Give this One Thing to New Dads to Bring Them in Right from the Start
Posted by National Fatherhood Initiative January 11, 2022
How Effective Are Programs Supporting Unmarried, Nonresidential Fathers? 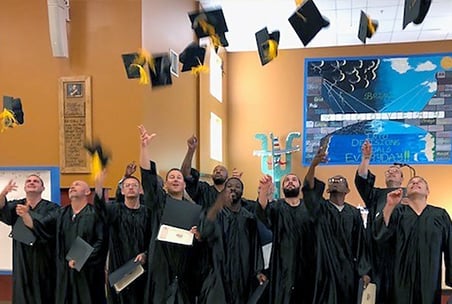 “When I first started the [InsideOut Dad®] program, I figured I was too old to get anything from it because both of my children are now adults. I was wrong. This program taught me things about myself that I’d kept suppressed. Mainly it assisted me with building a loving relationship with my son and daughter who had all this time yearned for the humility and honesty that comes from being a father no matter what age. I learned that my children still needed and wanted their dad. Mr. Cage made his lessons instructed, open, and fun. I truly owe a lot to what InsideOut Dad® taught [me].” – Operation New Hope Client, CJ

I recently had the pleasure of speaking with two gentlemen from Operation New Hope located in Jacksonville, FL: Curtis Hazel, Community Engagement Director and Ronnie Cage, Fatherhood Initiative Coordinator and InsideOut Dad® Facilitator, who are having great results combining InsideOut Dad® for incarcerated fathers with their Ready4Work® program upon those fathers’ release.

Operation New Hope provides support, life and job skills training for people with a history of involvement with the criminal justice system, and places them in employment that offers a sustainable quality of life. Their vision is to build a stronger community by creating opportunities to realize second chances and reduce recidivism. Operation New Hope runs National Fatherhood Initiative’s InsideOut Dad® program for incarcerated fathers at the Baker Correctional Institution, Montgomery Correctional Center, and through the Work Release Program at Bridges of America.

After fathers complete InsideOut Dad® and are released, Operation New Hope recruits the same individuals to their Ready4Work® program, a 4-week life and job skills training program to help them get back on their feet after they are released. The program offers clients housing assistance, case management, job coaching, vocational skills, and soft skills. About 10-15% of the dads who go through InsideOut Dad® go through Ready4Work® (dependent on release city and ability to access the program). They’ve graduated 350-375 fathers from InsideOut Dad™ since 2014.

I asked Ronnie what he liked most about the InsideOut Dad® program and he said “the fathering handbooks”. The dads love them since they get to call it their own and write down their thoughts. He also says that is makes it “more real” for the guys since they can follow along. He loves that the topics are “so on point with what men and fathers deal with” and also how the program fits together in just the right order. “Some subjects you just don’t talk about (like co-parenting) until you’ve addressed other subjects (i.e. family history and what it means to be a man) which gives the program a great flow.”

While Ronnie and the dads love the fathering handbook, what the dads might love more is Ronnie himself. At NFI we’ve always said that the facilitator makes the program, and that can’t be any closer to the truth than with the programs Ronnie facilitates. Back when Ronnie began running InsideOut Dad® at Baker Correctional, there were only 17 guys in the first class, and maybe 12 or 13 in the next. But one inmate loved the class so much, that he became the recruiter for InsideOut Dad® in his facility – and Ronnie didn’t have to recruit anyone after that. Now a days, the inmates always say that they heard about the class from another inmate. “It has street cred” so to speak, and the inmates love it because of what the curriculum brings and how Ronnie teaches it.

Ronnie’s tips for being a great facilitator and relating to the guys?
“Being raw and keeping it 100. You have to be real. These guys see right through phony”, he says. You have to believe in the curriculum enough to be able to say, ‘everything I am sharing with you is the correct way to do these things…but at the same time, what I’m sharing is going to make you uncover some things you don’t want to uncover’.

Further, Ronnie knows when to use the program facilitator’s manual, when to deviate from the session, and when to bring the conversation back in. “You have to be able to explain and talk about fatherhood to a guy who hasn’t been a good father, who lacks skills, and be real enough to make him be able to see it on his own. You’ve got to spoon feed the guys. You have to be able to share this info with a guy for him to walk away and say, ‘maybe I’m mad at first’, then say, ‘wow, I needed to hear that’.” One inmate told Ronnie, “I was mad at you the first week [about what was shared in the session], but you were exactly right!”

What Ronnie loves the most is seeing “a light bulb” that goes off for the guys – and their barriers come down. They immediately begin using the skill they've learned on the kiosks back in their cells to talk with their family. He hears about dads and moms getting along better because dad’s communicating better and using the information he learned right away.

To close out the programs at the facilities, they always do an official cap and gown ceremony with graduation music. The Warden makes a speech, the Chaplin speaks, Ronnie shares some funny and memorable moments from the session, and the dads get their picture taken with their InsideOut Dad™ graduation certificate. Closing with the official ceremony also helps to “make it real” for the dads. Ronnie wants to make it real all the way through to the end.

Ronnie looks at his work as planting the seed, but realizes that he can’t plant the seed, water it, AND watch it grow all the way. The dads have to take what they’ve learned and do the work after release. In fact, some of the most touching feedback Ronnie has received was a text from a guy whose son took Ronnie’s class two cycles ago at Baker Correctional. The text said, “I was at Baker on Saturday to see my son and he told me you helped him a lot, I wanted to say thanks my friend”. Ronnie knows there’s so much “more” in that text than is being said – the class participant and his own dad have been talking. “This kind of work with fathers is about their own father, and their grandfather – because often there’s been possibly more than two generations of dysfunctionality.”

NFI sincerely thanks Operation New Hope, Curtis Hazel, and Ronnie Cage for their work rehabilitating fathers and helping to connect them with their children, heart to heart. And not only that, helping to keep those dads out of jail or prison and present in the lives of their children. We couldn’t ask for anything more.