Posted by Christopher A. Brown October 19, 2021
Use this Exercise to Address Gendered Parenting
In your work with parents, do you address the ways in which dads and moms interact with their sons and daughters... END_OF_DOCUMENT_TOKEN_TO_BE_REPLACED
Posted by National Fatherhood Initiative October 12, 2021
My Brother’s Keeper of Greater Richmond Provides School Backpacks on Behalf of Incarcerated Dads
Posted by Christopher A. Brown October 5, 2021
This One Tactic Could Boost Retention in Your Fatherhood Program

The Surprising Facts about Payments of Child Support 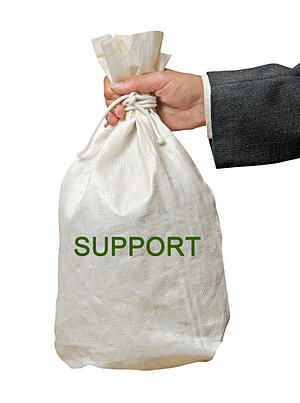 As an observer of trends in attempts at the federal, state, and local levels to engage non-custodial fathers in the lives of their children, one of the trends I'm most pleased to have witnessed is the trend in the realization that most low-income non-custodial dads are "dead broke" instead of "deadbeat."

Nevertheless, it's important to continue to ensure that the children of non-custodial dads have access to financial resources. Enforcement and collection of child support has been the primary focus of the federal government and states in this regard. From 2001-2012, the federal Office of Child Support Enforcement reports a whopping increase of 50 percent in child support collections from $21 billion (yes, that's with a "b") to $31.6 billion.

Some of the tactics that states and local jurisdictions have employed to increase child support collection among low-income non-custodial dads include:

Some states, such as Texas, have gone so far as to reconfigure their entire approach to collecting child support by reorganizing the agencies that collect such payments to focus on providing an array of services that strengthen families. In these states, the financial resources provided by non-custodial fathers is seen as only one of the assets that their children need to thrive.

Do the answers to these questions suggest that it's not worth the effort to collect what these moms owe even if it would help custodial dads provide adequate financial resources to their children?

The answer to the first two questions is "no." According to a report from the U.S. Census Bureau, custodial dads were owed $3.7 billion in child support in 2011. While that pales in comparison to the 31.7 billion owed to custodial moms in 2011, it's not an insignificant amount, and it's certainly not insignificant from the perspective of the custodial dads and their children. The rate of poverty among custodial-mom families was almost double that of custodial-dad families. Nevertheless, a significant proportion of custodial-dad families (16.2 percent) lived in poverty while even more were undoubtedly "poor."

The answer to the third question is where these data get really interesting and, depending on your view when you started to read this post, surprising. A slightly lower percentage of custodial dads (41.4 percent) received all of their child support compared to custodial moms (43.6 percent). Moreover, a significantly higher percentage of custodial dads didn't receive any payments (32 percent) compared to custodial moms (25.1 percent). It's striking that it's as much of a challenge to collect payments from non-custodial moms as it is to collect them from non-custodial dads. The likelihood of paying child support is, at best, gender-neutral.

It should be clear by now that the answer to the final question is a resounding "no." It's worth the effort to collect child support from NCPs regardless of gender. Organizations at the federal, state, and local levels should develop, test, and implement strategies and tactics effective at collecting child support from non-custodial moms and dads while acknowledging that some of these strategies and tactics might need to differ based on gender.

What is your agency doing to ensure that children receive financial resources regardless of which parent has custody?