Posted by Ave Mulhern January 24, 2023
A Few of My Favorite Things… and they are FREE!
You may know that National Fatherhood Initiative® (NFI) is the nation's leading provider of fatherhood research,... END_OF_DOCUMENT_TOKEN_TO_BE_REPLACED
Posted by Christopher A. Brown January 17, 2023
How Father Involvement and Bi-Strategic Parenting Positively Affect Children’s Brain Development
Posted by Erik Vecere January 10, 2023
One-On-One Delivery of NFI Programs – So Simple, So Effective!

If You Have a Daughter, #DadsWay Means Dancing

I don't dance. So you can imagine the nervousness and anticipation I experienced upon hearing that Bella, my six-year-old daughter, was to attend her first (and annual) Winter Formal Daddy-Daughter Gala for her Girl Scout Troop.

As I read the invitation, several words leaped out at me and I knew—this was it—this was the moment wherein lies the difference between good dads and great dads. Looking back on the Winter Formal Daddy-Daughter Gala Dance Thingy, there were words that leaped from the invitation and seemed to strangle me in a choke-hold. Words like: 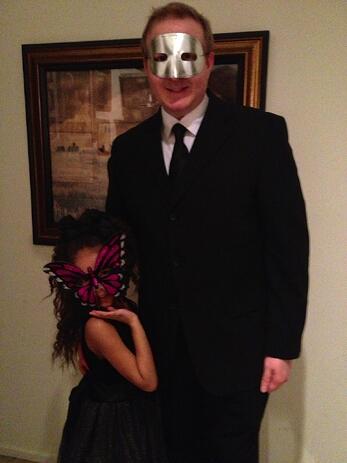 "Winter Formal"
Honestly, the committee couldn't make this "informal"?! Was the Gala-committee sitting back thinking of ways to make this event more uncomfortable for non-dancing dads?! Answer: yes. Yes, the committee was doing exactly that.

"Dress: Suit & Tie"
Now, I'm not the guy who never wears a suit and tie. But, when "suit and tie" are the minimum dress a dad is to wear, there's a certain ante that's upped—uppped to the level of "maxed-out uncomfortableness" for a Friday night.

"Masquerade Masks"
Great. Not only was there gonna be dancing all uncomfortably and in a formal way, there was to be crazy, creepy masks. Awesome. Add this to the column: "Ways to make dad uncomformtable and not attend your dance."

Fast forward to the dance. Once we stepped into the Winter Formal Daddy-Daughter Gala, things weren't so bad. There was a dance floor—ugh. But, there were also tables in the dance vicinity—score. And a long table with food and desserts—score, again. 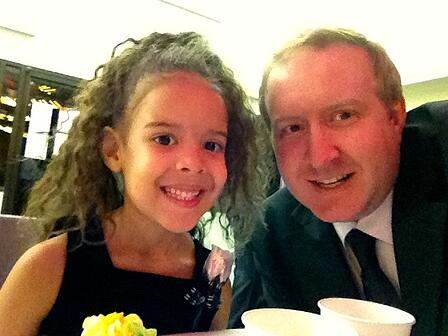 Then there were the raffles. I spent several minutes in line guessing the number of jelly beans in hopes of winning a pink princess tent. After several guesses and $20 later—we didn't win the tent.

Also, and I hadn't originally thought of this, but there were other dads at this daddy-daughter event. I immediately found two wingmen-dads. One dad was a Gala-newbie like myself. But one dad, he was a Gala-pro. We kept one another comfortable while our daughters ran around the dance floor. The Gala-pro's daughter had taken off her shoes. My daughter soon followed.

Turns out, Gala-pro dad had an older daughter, age 8 or 9 or something. This was like his fourth Gala. His daughter was doing her own thing at this point. All Gala-pro dad had to do was show up and watch. The daughter had friends and other things to keep her busy. She didn't have to dance with her dad the whole night. This led me to two conclusions:

The next song plays...I grab Bella...we twirl and dip...dip and twirl. That's pretty much my entire repertoire. After the song, there was a break for raffle-winner announcments. They actually called "Isabella Sanders" over the speakers. Out of the millions of girls (well dozens of girls) in attendance, Bella won a big raffle prize. She won a wooden jewelry box. They must have seen me placing all that cash in the jelly bean raffle.

There were more dances. Then, more standing hand-in-hand at the juice line. I talked more with my wingmen-dads about life and how quick the time flies. We talked about how much we hated dancing.

Then, there was the last dance call. I found barefooted Bella and held her. The emcee said something special (I don't remember what, I was nervous). Then, Whitney Houston music started. You know, slow-jam Whitney.

If you're me, you've spent your life caring little about Whitney's slow jams. Why? Well, because those said slow jams didn't involve you dancing. At grade school dances, you could sit on the bleachers. In middle school, you could stand by the wall. In high school—outside in the car. In college, well, who attends dances in college?!

But this last-dance was different. This last-dance was Whitney Houston's "I will always love you". It was a rallying cry to hold my sweet, formally dressed, barefooted Isabella. This was really a "last dance" in many ways. How often do you dress formally and dance? Oh, now I get it. The mom-steering committee had it right all along. This night was really special.

Thankfully, I've been able to dance in the living room and in retail store aisles many times with my six-year-old princess. And I hope to dance a few more times before she turns seven in a few months. Each dance has its own special quality, but this one was different.

This dance had as a background a room full of dads singing off key, and as loud as they could. You see, most of the dads had been there before. They weren't as nervous as me. They knew something I didn't. That as dads, you don't get many of these nights. You don't get enough of these dances. I'm still not certain if the dads were shouting off-key to be funny or to keep themselves from tearing up. I'm guessing the latter.

Me, I picked Bell up and held her in my arms until after Whitney's long last note. I've never been so grateful for Whitney's ability to hold a long note! Bella rested her head on my shoulder and I took a mental snapshot. We held hands as we walked off the dance floor, we grabbed more gum from the center pieces on the tables and I put Bella's shoes back on. Then, we walked slowly to the car—just me and Bell.

By the time we were buckled safely in the car, Bell was thinking about fries at the Burger King next door. Me? I was thinking about a line from a Tim McGraw song, "Someday you'll be looking back on your life at the memories, this is gonna be one of those nights..."