Posted by Ave Mulhern January 24, 2023
A Few of My Favorite Things… and they are FREE!
You may know that National Fatherhood Initiative® (NFI) is the nation's leading provider of fatherhood research,... END_OF_DOCUMENT_TOKEN_TO_BE_REPLACED
Posted by Christopher A. Brown January 17, 2023
How Father Involvement and Bi-Strategic Parenting Positively Affect Children’s Brain Development
Posted by Erik Vecere January 10, 2023
One-On-One Delivery of NFI Programs – So Simple, So Effective!

"My pop left when I was young, so he didn't teach me how to be a man nor how to raise a child...or treat a woman...of course..the two things I need I don't have...and I have a daughter." —Jay-Z

US Magazine posted about Jay-Z talking fatherhood and the inspiration behind his new song "Jay-Z Blue" from the upcoming album Magna Carta Holy Grail in Jay-Z Almost Cries About Blue Ivy." 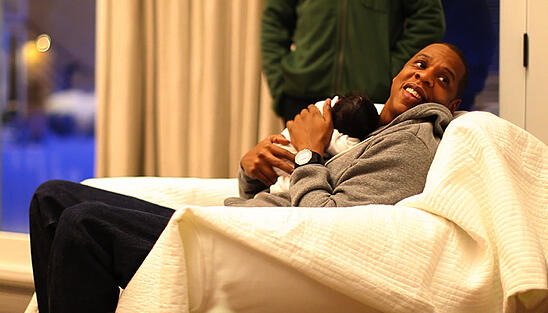 Jay-Z is obvisiously emotional as he talks about his new song and his daughter, Blue Ivy. In the new commercial for his album, you're placed "behind the scenes" with Jay-Z opening up privately with the one and only music producer Rick Rubin. Rubin's laying on a sofa and Jay-Z says, "[She's] something that we both created, you know, we still marvel at her..."

He continues talking directly to Rubin about the weight and worry he feels of not having a dad to show him right and wrong and is obviously pointing out the inspiration behind his song "Jay Z Blue." He says:

In a moment of holding back tears, Jay-Z says, "So, of course, my karma, the two things I needed I don't have, right?...And I have a daughter..." He continues, "It's the paranoia of not being a great dad."

Catch the video now. If you can't view it above—it's here.

Verse three of the song "Jay-Z Blue (Daddy Dearest)" reveals the fear Jay-Z has of not being an involved dad to his daugther and trying to deal with his past:

What's your biggest fear as a parent?
"Magna Carta Holy Grail" releases July 9. Here's to Blue Ivy growing up able to sing, "99 problems but a dad ain't one." Sorry, someone had too.