Posted by Christopher A. Brown June 28, 2022
Teach Dads These 3 Qualities of Successful Fathering
“Habits may be the smallest units of transformation, but they’re also the most fundamental. They are the first... END_OF_DOCUMENT_TOKEN_TO_BE_REPLACED
Posted by Ave Mulhern June 22, 2022
24/7 Dad® - Worth the Wait
Posted by National Fatherhood Initiative June 16, 2022
[Father’s Day Special] The CHI Podcast featuring NFI President Christopher A. Brown: Why Dads Matter

The Challenge of Becoming a Single Father

No one goes to the altar expecting to end up divorced, but it's a distressingly common occurrence nonetheless.

Couples get together with the very best of intentions, full of hopes and dreams, white picket fences, 2.5 kids, or even a penthouse uptown. A life together, a future as a team, and perhaps some little people added to the mix. 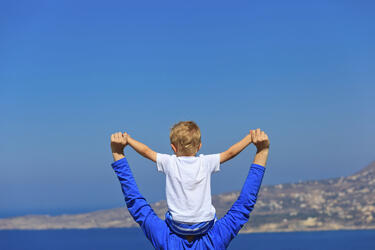 That's what was running through my head when I walked up the aisle almost 18 years ago, anxious, teary and excited to take the next step in my life with the woman I loved.

Then we had one, two, three children and somehow bringing tiny little people into the mix didn't make our relationship any easier, didn't help us find a common ground and get along smoothly. Every parent knows this, but you have to find out yourself anyway: having a child is hugely stressful on a relationship.

We tried to make it work. We talked, we tried different approaches to parenting, we worked with counselors, we went to workshops and seminars. But that fateful day came to pass where we just realized that, kids or no kids, we were really not making it as a couple and were both perpetually unhappy and resentful.

So we split up. Theoretically, to have a break from each other, but I could read the writing on the wall and started preparing myself for what ended up being a long, contentious divorce.

Single parenting is hard. Single fathering is even harder.

I suddenly found myself a single dad, with children who were 10, 6 and 3. And while I'd always been an active, involved dad, it was a completely different experience when I didn't have someone to help out if I was getting frustrated, was tired, not feeling well, or just had a vision of things going one way while they were quite clearly headed in another direction.

Like going from tag-team wrestling to having to take on the other opponent solo. Worse, in a lot of situations, far from "having your back", your ex can be eagerly waiting to point out your failings, digging that knife in just a bit deeper, while telling the children "daddy has issues, but at least you have me."

Let me be blunt. It's not easy being a single parent.

I think it's tougher on us men, however, because we aren't raised to nurture and be empathetic. In fact, Western society does its best through a culture of shaming, bullying, crass images of masculinity and dismal media portrayals of fathers to teach us men that we're just not going to be successful parents.

We don't tote babies around when we're little, we aren't the one hired to babysit the twins down the street when we're in our teens, we're instead pushed to physical activities, sports, video games and other activities that emphasize the testosterone factor rather than help us learn how to balance it with the more traditionally "feminine" aspects of humanity.

And so retrospectively, it's no surprise to me that the first year of my single parenthood was damn hard. I had always been the disciplinarian in our household, the one who actually had - and enforced - rules and behaviors. Suddenly life was about a lot more than just being the drill instructor and I didn't know how to handle it. A crying toddler? A grumpy daughter because a boy snubbed her? A boy devastated because he failed to make the winning shot? All new because I couldn't rely on mom to be the sympathetic parent.

It was rocky, and there were definitely moments I look back on with great sadness and disappointment. I could have done better, I could have handled them better. Or perhaps not. Perhaps the journey of man to loving father does require some turbulence along the way.

Interestingly, my ex's household was chaos for years because as a single mom she faced the opposite challenge, that she's wonderfully sympathetic and therefore rarely had rules and certainly hated to enforce them or impose consequences for violations. Her household was a zoo, with no bed times, no meal times, all replaced by lots of mom/kid cuddling and sharing.

Time has a way of healing and improving things, and after almost 7 years of flying solo, I've learned a few things about finding the balance between innate male reactions and the need for a child to have a parent who is present, who is tough when needed but who is also sympathetic. Sometimes a hug and a treat are the best response while other occasions require a time out or extra chore.

What I will share with any man who is just stepping into this new world of single parenting is to take a deep breath and let go of your expectations. Parenting really isn't about tomorrow as much as it is about this very moment. Rules are good, but their little hearts, their expectations, their dreams are what it's all about, so pay attention. Listen. Don't "fix" things that don't need fixing. And have fun. It took me years to be able to really just relax and enjoy my children.

And cut yourself slack. It's a tough job, this solo parenting thing. You'll make mistakes, but with positive intention and love, you'll all make it through. If it's going really poorly? Reach out and get some help. No shame in that, brother.

This is a guest post by Dave Taylor. Dave is a Colorado-based father's rights advocate and single father to three fabulous children, now 17, 13 and 10. You can read about their exploits and adventures at GoFatherhood.com and you can get in touch with him at dave@gofatherhood.com.